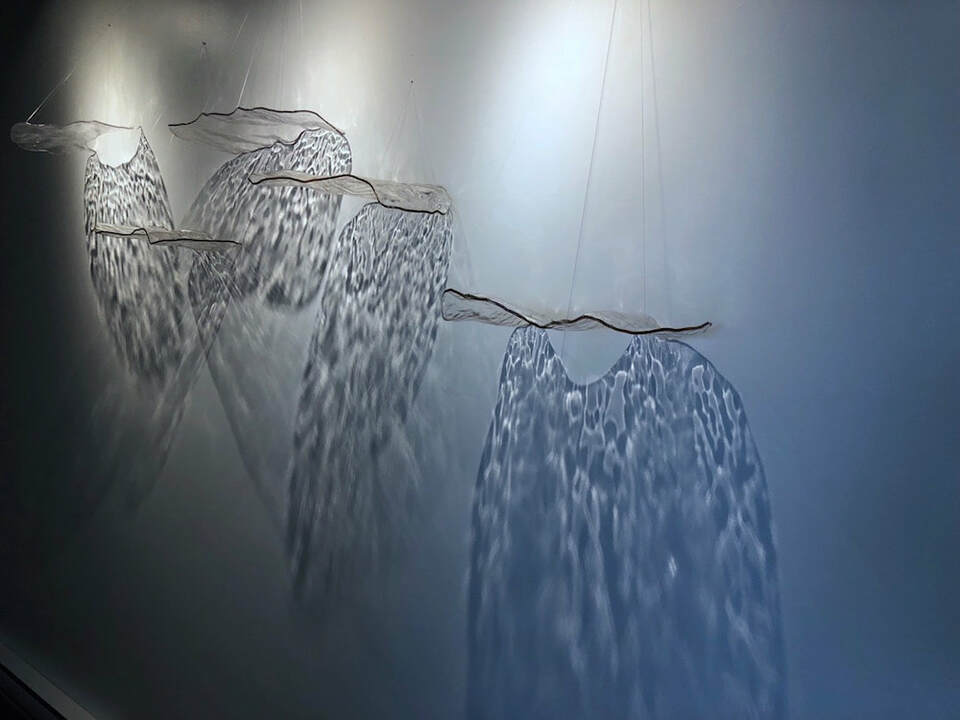 Meltdown, 2018, plastic fishing line, dimensions variable
Even with significant evidence of global warming, plastic was used to create a frozen world of pseudo-ice sheets and structures for the 2010 Winter Olympics.  While the Olympics was a celebratory, connective human experience it simultaneously contributed to issues of marginalization, consumptive excess and material waste.  Using plastic remnants gathered from this single-use, frozen world as metaphor for the world’s disappearing ice, Meltdown interrogates the threat of global warming. 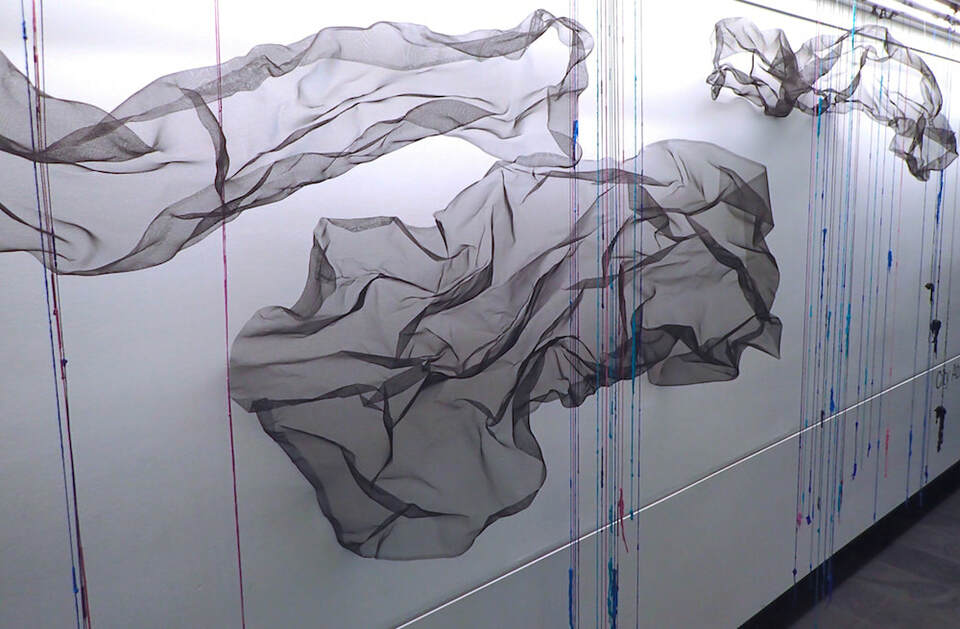 Salish Sea: J35 less 1, 2018, aluminum mesh, yarn, acrylic, dimensions variable
This work situates us in a time where the eco-system of the Salish Sea is threatened by a variety of factors, including the highly debated Trans Mountain pipeline project.  If approved, this project would create a seven-fold increase in the number of oil takers moving through these waters and  would negatively impact the feeding practices of a small pod of endangered Southern Resident Killer Whales.

In this midst of the environmental, socio-political, and economic debate about the Salish Sea,  female Southern Resident Orca Tahlequah (J35) gave birth to the first, albeit short-lived, surviving calf that her population has had in three years. In an act of what scientists called “a tour of grief” J35 carried her dead calf for 17 days for a distance of more than 1,600 km.  Simultaneously 3 year old Orca Scarlet (J50), also a member of the same pod, was identified as being emaciated and ailing, prompting a large scale effort by the National Oceanic & Atmospheric Administration to work with partner agencies such as the Vancouver Aquarium, to attempt medical treatment in the wild.  J50 was declared dead mid-September, 2018.  Through wide-spread media reporting, the plight of J35 and J50 captured the hearts of millions and highlighted the larger threat to their species and the Salish Sea as a whole. 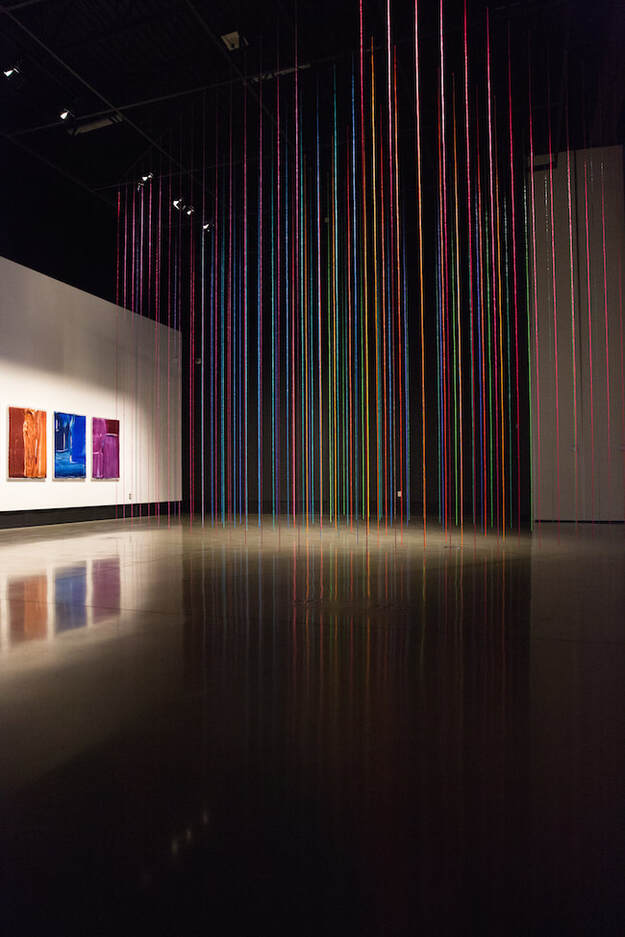 ​​By a Thread, 2016, acrylic, yarn, 18x12x18’
The labryinthine installation, By aThread, explores the notion that the dominant western social condition is one of a continuous state of desire.
We take action to satisfy our yearnings, whether consumptive, intellectual, existential, or experiential, but only achieve momentary relief before desire resurfaces, forcing us to reinitiate or search, a quest that has been exacerbated by technologies such as online search mechanisms.  For some this ongoing quest may be a comfortable meditative condition, but for others perhaps the opposite.

Historically and within popular culture, the maze or labyrinth has operated as metaphor for questioning, searching, or confusion.  In this work hundreds of strands of yarn dipped in acrylic paint hang from the ceiling to create pathways of colour, a contradictory environment where calmness, beauty or the poetic co-exist with confusion and disorientation.

While moving through the work viewers' spatial norms alter as their bod and line of sight shifts.  Perfectly aligned rows of yarn morph from a singular line to a voluminous disorienting form.  Optics and balance are challenged when equiluminant day-glo colours -- a reference to technology and the colourful strands found inside fibre-optic cable -- advance, recede and vibrate, ultimately creating an illusory sense of movement and tenuousness, while simultaneously being aesthetically engaging.

This search is one without resolve as the path begins where it ends. 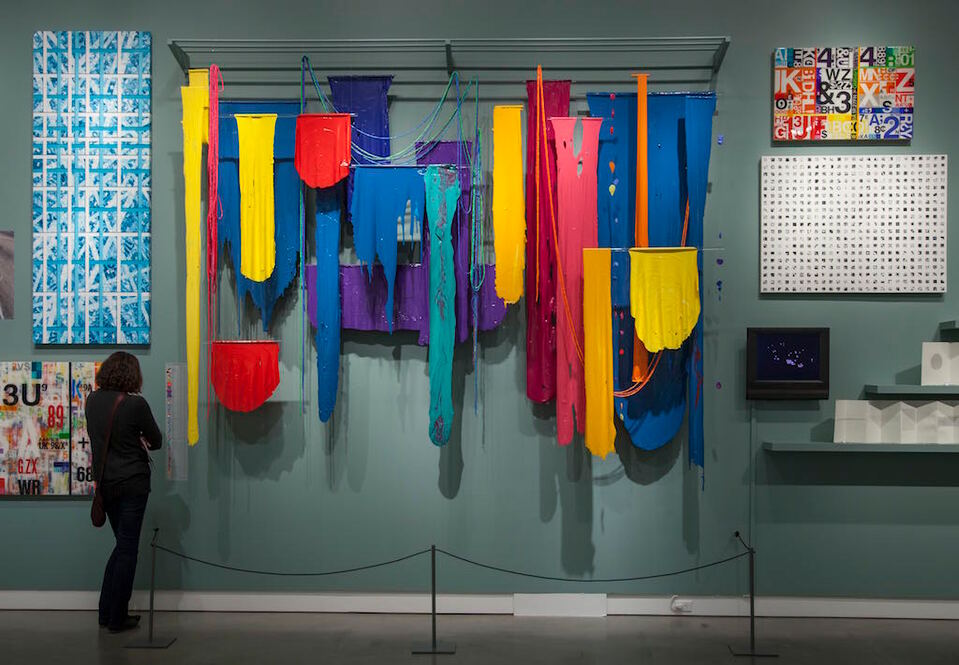 This artwork is a response to news articles and research on the cultural significance of language, Canada’s linguistic diversity, and the preservation of endangered languages.  It gives expression to the complex human geography of the City of Surrey by drawing on Statistics Canada census data, with the data-set Mother Tongue — standing in as metaphor for communication, an indicator of diversity and origin, and as a data-visualization tool.

To visualize the diversity of Surrey, the percentage of people reporting a specific language as their Mother Tongue is translated into a volume of paint, each with its own colour.  These volumes are transformed into yarn dipped in paint, or paint poured into sheets, globs, or spots.  English, at 51.72% is represented by the wall of the “white cube” itself, notionally bringing the architecture of the space into the work.
Powered by